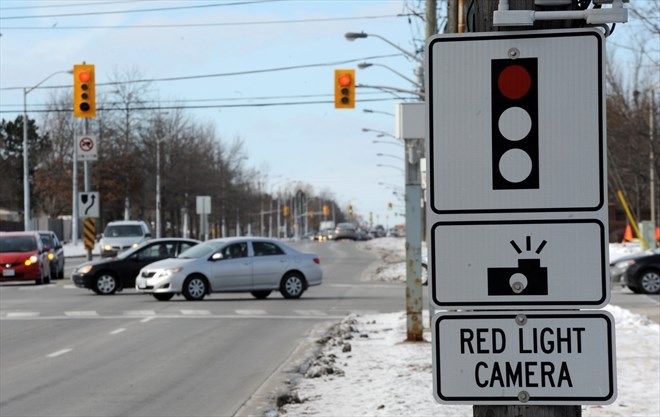 We DO NOT defend Red Light Camera offences.

A common offence that most drivers come across is the red light camera. A red light fine is a total cost of $325, there are no demerit points. You do have the option to fight this offence in court.

So how do red light cameras work?

Firstly, the cameras work as soon as the light changes. It does not take pictures of cars who enter the intersection when the light is amber, however, it does take a photo of cars passing through when its red.  The camera scans the cars approaching and checks to see if the speed is consistent with stopping.

Secondly, the camera will then time stamp the photograph of the vehicle. It will take two photos within seconds of each other; one as the car approaches the light and the second is as it passes through the intersection.

Finally, the photos are reviewed by Provincial Offence Officers who follow a list of criteria to determine if it is a red light offence.

So how do red light camera locations get decided? They are chosen from past data analysis of the intersections. Red cameras are placed in areas where there have been fatalities or serious collisions in recent years.

From May 2017 to May 2018 through those 12 months the following had been the top 6 red light camera intersections:

Where are drivers getting the most red light camera tickets in Halton?

To all those aggressive drivers out there: you may want to think twice about speeding up with that light turns amber in the hopes of shaving a few minutes off your commute.

In addition to the potential to cause a serious collision, there could be a red light camera waiting to catch you in the act.

Red light camera infractions are more common at certain intersections in Halton than others, whether it be the nature of the intersection, the location itself, or the fact that some drivers may be unaware of the camera.

Here are the top six locations in Halton where red light camera tickets have been issued from May 2017 to May 2018:

Where are the other Halton locations for red light cameras?

Red light cameras are currently located at the following intersections:

How do the red light cameras work?

The cameras have the ability to function as soon as a traffic light turns red (drivers who enter an intersection during a traffic light’s amber phase will not be penalized, even if the light turns red as they are passing through). The cameras scan the approaching vehicles for any that appear to be moving at a speed not consistent with stopping, said Roger Browne, manager of traffic control and safety systems for the City of Toronto.

What happens once the photos are taken?

Each set of photos is reviewed by provincial offence officers at the Joint Municipal Processing Centre in Toronto, who are expected to follow a list of criteria to determine whether or not there is enough evidence for the red light camera charges to stand up in court, Browne said. He says the officers look for a variety of elements, including confirming the date and time on the image, making sure the licence plate is clear and legible, making sure the stop bar is visible and ensuring that the streets signs can be seen in the photo to verify the vehicle’s location.

If the image checks off in every category, the individual the vehicle is registered under is mailed a fine. If it does not, charges cannot be issued.

How are the red light camera locations chosen?

The red light camera locations are chosen based on the number of fatal and serious injury collisions that have occurred at those intersections in recent years.

If a driver does get caught on red light camera, what’s the penalty?

The penalty for being caught by a red light camera is a $325 fine (no points). Drivers do have the ability to fight the charges in court. However, Browne says that due to the thoroughness of the officers’ review of the images, fighting the ticket can backfire for others. He notes that for those who choose to take the court route, there is always the possibility the fine amount will be raised.